The Patriot Center was devoted to the introduction and display of Mason’s basketball athletes in a pep rally at the seventeenth annual Mason Madness event on Friday night. Though the doors only opened at 7:30pm, there were giveaways at the door at 7, and a considerable crowd gathered before the event was held at 8 o’clock. Cheerleaders peppered the crowd with Mason spirit and in return family members and visitors joined students in the Mason Fight Song. The voices of siblings, parents, students and staff alike echoed back the refined sounds of Mason’s band, the Green Machine. Doc Nix led the band with the astounding flourish for which he is renowned. As the cheerleaders enraptured the crowd with a series of daring stunts, the Masonettes dance team kept time with the music through their graceful routine. The showcase of Mason talent did not end there, Urbanknowlogy further amazed with their perfectly synched and astonishingly well choreographed dancing. 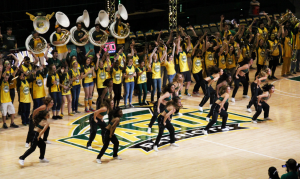 The highlight of the occasion, however, was the introduction of the season’s new and returning basketball players. Both men’s and women’s teams were introduced with great enthusiasm and fanfare. As they made their way down to the court to join their coaches and fellow team members, their names, positions, and smiling faces were broadcasted on the screens around the stadium, making them familiar to the entire Mason populace. The players also received an enthused greeting from the Patriot mascot upon reaching the court. The teams then showcased their talents in a game of knockout and several scrimmages. The Green Machine and cheerleaders kept the crowd cheering on from the stands.

Though Mason Madness is geared toward the introduction of the men’s and women’s basketball teams, the Green Machine, Urbanknowlogy, the Masonettes and cheerleaders all made memorable appearances. Even the Patriot joined in with the festivities, hyping the crowd and carrying a flag with the cheerleaders. The event ended with t-shirts being tossed into a roaring crowd, a closing number by the Green Machine, and free Chick Fil-A to Mason students.