Jamming Away To An A

Freshman Stars of the Fall

Who would have thought that making the decision to trek all the way to Original Burger and satiate my hunger, would present me with an amazing modeling opportunity? On Saturday, November 23, the Patriot Activities Council hosted the annual Red Alert Fashion Show, in honor of HIV/Aids Awareness month.  The show was hosted by Mason alumni and Miss Bronx 2013, Delesia Watson, and took place in Dewberry Hall, located on the ground floor of the Johnson Center.

I was first notified of my acceptance as a model for the HIV/ Aids Awareness fashion show in late September. Rehearsals for the fashion show began in early October on Tuesdays and Thursdays, but then they became once a week, in order to accommodate different scenes.  Finally, the week of the show, practice was Monday- Thursday. Fashion show practices took place in the Office of Student Involvement in Sub II (The Hub), beginning at 9:45 in the evening. Throughout the preparation process, punctuality and dedication were both very valuable assets.

The day of the show the models reported to the Gold Room, found in the Johnson Center ground floor, at 11am. There, we were greeted by hair and make-up artists from Paul Mitchell Studios, who created a variety of looks and hair styles, so as to keep a sense of variety throughout the show. The hours before the show were spent in a non-stop agenda, consisting of dress rehearsals, fittings and beauty preparation (guys included). The pre-show frenzy did not end until minutes before the show began, and even then, many heart rates were still accelerating. 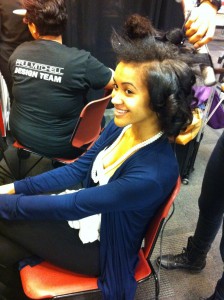 Nonetheless, the show was a complete success. The packed house held a number of distinguished individuals from DC Fashion Week and other modeling groups. The Patriot Activities Council was able to obtain donated clothing and accessories from designers and stores, in order to make the models look their absolute best. Clothing Stores Langford Market and Courage B donated the female models’ attire, while the men’s clothing were donated by up and coming fashion line, BEYU.  There were performances by Urbanknowology, Dance Works and many Mason students, including Brandon Showell of the Alpha Phi Alpha Fraternity.

The highlight of the entire night was Project Condom, where students designed formal attire using actual condoms. My favorite was the condom suit, complete with a matching red tie. Project Condom was just one way to raise awareness for HIV and Aids. The Patriot Activities Council, GMU Fashion Society and Mason Cable Network shot a short promo video explaining the causes and effects of HIV and Aids. All in all, the HIV/ Aids Awareness Fashion Show was able to raise awareness for a cause that is dramatically affecting the world, and were able to do it in a fun, interactive, and educational way. 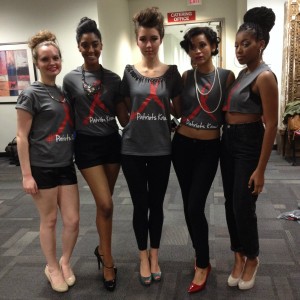